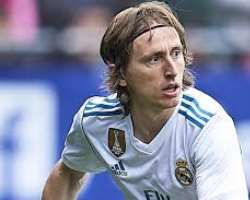 Real Madrid’s Luka Modric has edged out Cristiano Ronaldo and Mohamed Salah to win the 2017-18 UEFA Player of the Year award.

Modric’s excellent season at the Bernabeu was recognised at  the Champions League draw  in Monaco on Thursday, with UEFA president Aleksander Ceferin on hand to present the prize to the Croatia international.

Thursday’s win caps off a stellar 12 months for the 32-year-old, who also won the Golden Ball for his performances in helping Croatia finish as runners-up at the World Cup in Russia.

UEFA also named the Women’s Player of the Year at the ceremony, with Wolfsburg’s Pernille Harder beating Lyon duo Ada Hegerberg and Amandine Henry to the top prize.

David Beckham was also recognised on the night, receiving the 2018 UEFA President’s Award from Ceferin for his “outstanding achievements, professional excellence and exemplary personal qualities,” while San Jose Earthquakes defender Guram Kashia won the inaugural #EqualGame award  for his support of the LGBTQ community last season .