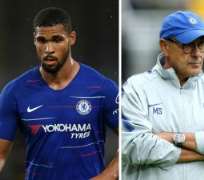 Chelsea midfielder Ruben Loftus-Cheek is reportedly furious with the Blues after they rebuffed two loan moves for him from foreign clubs.

Chelsea rejected offers for Loftus-Cheek from Monaco and Schalke despite the 22-year-old slipping down the pecking order at Stamford Bridge.

The England midfielder appears to have dropped to sixth in Chelsea's midfield options and has only featured for 22 minutes so far this season.

The European transfer window does not close until Friday, but the highly-rated midfielder looks set to be stuck at Stamford Bridge until at least January.

Loftus-Cheek has only featured twice for Chelsea this season, coming on as a substitute on the opening day against Huddersfield.

Loftus-Cheek had hoped that after his promising loan spell with Crystal Palace which earned him a place in England's World Cup squad would give him a chance to play regularly and continue his development under new Chelsea boss Maurizio Sarri.

However, the Italian brought in Jorginho from former club Napoli and signed Mateo Kovacic on loan from Real Madrid.

With N'Golo Kante a nailed-on starter each week, and Ross Barkley and Cesc Fabregas seemingly ahead of him in the pecking order, Loftus-Cheek is growing frustrated at his lack of opportunity despite frequently told to be patient by Chelsea management.

The Blues' stance now has him fearing for his England chances with boss Gareth Southgate set to name his first post-World Cup squad on Thursday.