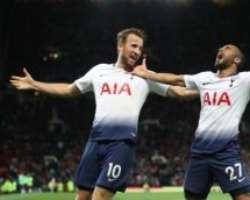 But such is Mourinho's luck, his side were further behind just two minutes later.

Jose Mourinho would not make much of a poker player. His critics suggest he is easy to read. And Tottenham called his bluff, cashing in on some catastrophic defending, with Harry Kane and two goals from Lucas Moura earning the Londoners a deserved 3-0 victory.

Two goals in seven minutes after the break handed Spurs only their third win in the last 27 trips to Old Trafford.

Spurs have lost more league games at Old Trafford (21) than any club has lost at any away venue in Premier League history, so the importance of a big result was all too clear. Under Mauricio Pochettino, Tottenham came here having won just two of their 20 Premier League games away to Big Six sides (D7 L11).

And for much of the first half, it appeared as that run would continue and Mourinho's gamble would pay off.

The Portuguese is not known for chancing his arm. But these are interesting times at Old Trafford and Mourinho threw the dice against a Tottenham side that had won its first two Premier League games.

In truth, while just two games in, United were already showing signs of fraying with rumblings of discontent over the negative style of play, the perceived lack of money to spend in the summer and an abject defeat at Brighton.

So this was a much-changed United side from the XI that were defeated on the south coast. Eric Bailly, who had a poor game against the Seagulls, was dropped from the squad, and there was no place for Anthony Martial, Andreas Pereira or Juan Mata. Young and Lindelof were relegated to the bench, with Valencia, Matic, Lingard, Smalling, Jones and Herrera all coming in.

Spurs had not scored in 17 out of previous 24 trips to Old Trafford and Mourinho set out the stall accordingly, with three at the back. It was a bold move, with Herrera dropping into the right-hand side of a three-man defence, with Valencia pushed high up that flank.

Pogba, Fred and Matic were in midfield, and Lingard supported Lukaku up front.

This less-negative line-up seemed to suit them, particularly early on, but they were helped by Tottenham's lack of width.

United started brightly and as early as the first minute a long ball from Valencia caused Tottenham's defence some issues, with Fred capitalising by sending a low strike at goal, but it whistled into the side netting.

Lukaku produced an early contender for miss of the season after 15 minutes when a sloppy, short back-pass from Rose gave him the chance for an absolute sitter, but such is the striker's confidence, having rounded Lloris and on the angle, rolled the ball wide with the goal gaping.

Soon after, Lukaku then scuffed a shot straight into the arms of Lloris after a good run and pull-back from Luke Shaw.

Spurs showed flashes of quality going forward and looked lively on the break. Dele Alli should have done better when he had the chance to release Kane after 26 minutes, but Chris Smalling slid in to halt the danger.

However, defensively the Lilywhites did not convince in the first half-hour. Rose has looked a little rusty this term and when Dembele is off his game, it is noticeable.

United had two more decent chances in the first half – Pogba had a shot well saved and Matic went so close when a deflected shot went wide.

Tottenham failed to register a shot on target in the first 28 minutes, but the longer the half went on, the more they pressed.

Lucas Moura had claims for a penalty just before the half-hour when he got the wrong side of Phil Jones. Matic made solid contact with Moura, who went down under the challenge and had VAR been in place, the outcome may well have been taken out of Craig Pawson's hands. As it was, appeals were waived away, despite Pawson standing just three yards away from the incident with an unimpeded view.

United were shaken into action and Fred produced a wonderful stepover as he drifted past Vertonghen before bending a shot just past Lloris's right hand post.

Spurs almost nicked a goal five minutes before half-time and Moura was again involved, but scuffed his shot badly, following a long ball from Vertonghen.

It was more than Tottenham manager Mauricio Pochettino could take and at the half-time whistle, he showed his displeasure, kicking out at some water bottles that flew about the technical area.

His players must have taken the hint, because they were a different side in the second period, although it could have been a different game had Pogba turned home Luke Shaw's assist following a driving run, rather than firing wide.

At the other end, Moura almost got in the end of a Kane cross-shot, but Spurs heeded the warning and Kane struck with less than five minutes gone in the second half.

It was soft goal from United's point of view and it was a combination that we have come to know well during the summer. Kieran Trippier floated in a corner, Phil Jones got lost in the mix as the England captain peeled off him, and Kane looped a fine header home to make it 1-0.

United had a great opportunity to level immediately after, but Lukaku's shot across goal from the angle saw Hugo Lloris produce a wonderful save to keep Spurs' noses in front.

The belief went out of United after a series of half-chances were spurned thereafter and Moura put the icing on the cake when turning Smalling inside out and, 12 yards out, whipped the ball past De Gea to make it 3-0 with three minutes remaining.

No, Mourinho would not make much of a poker player. He blinks too easily. Two seasons any club, perhaps win a couple of trophies, and the third-season it falls apart. With two defeats from three games, many will be thinking it won't be long before he cashes in his chips again.

And the chants of “your're getting sacked in the morning” from the Tottenham fans in the last few minutes may come back to haunt them. Pochettino is high on United's wish list. Be careful what you wish for.