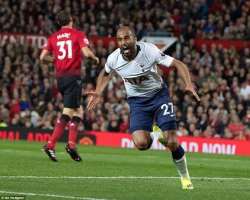 A second-half sucker punch of two goals in three minutes helped Tottenham Hotspurs to only their third ever Premier League win at Old Trafford as the Manchester United crisis worsened.

Harry Kane and Lucas Moura struck in quick succession, before the Brazilian added a late third, to inflict a 50th Premier League home defeat on United and pile more misery on Jose Mourinho.

The evening had started with a vociferous home crowd united behind a much-changed side, but ended with empty seats and gleeful chants of “sacked in the morning” from the Spurs following.

Mauricio Pochettino stuck with goalkeeper and captain Hugo Lloris, despite his drink driving charge, and gave first starts of the season to Danny Rose and Moussa Dembele.

Jose Mourinho made six changes to the side that had been so disappointing in defeat at Brighton last week, with Anthony Martial, Juan Mata and Eric Bailly dropped from the match day squad completely.

Prior to kick off, there had been talk that Nemanja Matic would start as makeshift back three, but the reality was even more surprising with Ander Herrera playing at right centre-back.

It was the return of Jesse Lingard that made the most difference though, with the England man installing an energy into the United press that hasn’t been seen for some time.

The hosts should have been ahead midway through the half when Rose, showing all sorts of rustiness, played a horrible back pass straight to Romelu Lukaku. The Belgian rounded Lloris but pushed his shot past the far post with the goal gaping.

It was a much improved showing from United, but they probably would have gone into half-time a goal down, had Craig Pawson not somehow decided that Phil Jones’ blatant foul on Lucas Moura did not warrant a penalty. After the break though, Spurs emerged rejuvenated and hit United with two goals in a devastating three minute spell.

First, Kieran Trippier’s out swinging corner was met with a brilliant header from Harry Kane, enjoying the London bus effect, having waited so long for an August goal.

The Dane found himself with far too much time, with Luke Shaw pushed on, and picked out the arriving Lucas Moura for his second goal of the season.