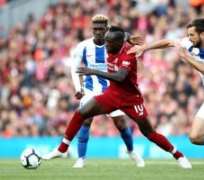 Liverpool remains unbeaten on the season, after a 1-0 victory over Brighton & Hove Albion at Anfield on Saturday.

The Reds earned their third straight victory, while keeping a shutout once again for  Jurgen Klopp 's group.

Despite some good work defensively from Brighton early on, a quick dispossession in the midfield led to  Mohamed Salah 's opener of the match, leaving the visitors baffled.

Brighton kicked off the second half with more fire, and came inches away from the equalizer through  Anthony Knockaert , but his attempt narrowly missed the far post after great work from  Glenn Murray  to center his cross.

Pascal Gross ' late header tested Allison at the near post, but the Brazilian goalkeeper did a tremendous job to push the attempt away from danger at the last second.

The Liverpool attack was in full force early on, and nearly broke the deadlock after just five minutes when Salah picked out  Sadio Mane  inside the Brighton area.

Mane's shot narrowly missed the near post, after leaving goalkeeper Mat Ryan motionless to watch the attempt go past the goal.

Ryan was tested again in the ninth minute with a tremendous save that denied  Roberto Firmino 's header from point-blank range.

The Reds kept their pressure up early and often, and  Trent Alexander-Arnold 's free kick was inches away from giving the hosts the lead after it struck the crossbar.

Late chances from Alexander-Arnold and  Daniel Sturridge  nearly sealed the deal for the Reds, however, the one goal proved to be enough on the day.

Liverpool will take on Leicester next up in the PL, while Brighton will play twice next week, with a League Cup fixture against Southampton before facing Fulham over the weekend.