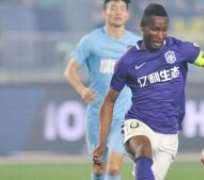 Nigeria captain John Mikel Obi is unlikely to leave Chinese Super League club Tianjin TEDA in the near future, according to his coach.

The Super Eagles stalwart has been  linked with a return to Europe  after an unspectacular 18 months at Tianjin, who he joined on a free transfer from  Chelsea  in January 2017.

Reports have also been doing the rounds that Mikel could link up with compatriot Ahmed Musa at big-spending  Saudi Arabian club Al Nassr , but Tianjin coach Uli Stielike remains sceptical.

“I don’t know anything about him leaving,” the German told reporters after Saturday’s 1-1 draw with Jiangsu Suning, Mikel’s first start for the club since May.

“He is under contract until the end of 2019. There there has been no mention of it here and he will have to talk to us before he does any deal, so I have my doubts about these reports.”

Mikel’s starting spot at Tianjin is all but a sure thing. According to Chinese Super League rules, only three foreigners can be included in a match-day squad, while Tianjin have four — Mikel, Frank Acheampong (Ghana), Felix Bastians (Germany) and Jonathan (Brazil).