Jose Mourinho is 'wrong man for Manchester United job' and could be gone by Christmas, says Lee Sharpe 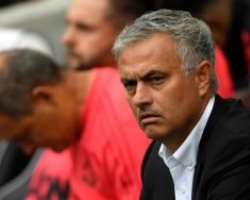 Former Manchester United star Lee Sharpe believes Jose Mourinho is living on borrowed time at Old Trafford and expects him to be gone by Christmas.

United’s season went into early crisis mode on Sunday  as a shoddy performance at Brighton brought a 3-2 defeat , with captain Paul Pogba later admitting Mourinho’s men lacked “hunger” and that the attitude was not right.

The loss came on the back of a troubled summer, with Mourinho frustrated by the United hierarchy’s failure to make signings before the transfer deadline and the Portuguese’s warning that a “difficult season” could lie ahead.

There has also been tension between Mourinho and Pogba, the club’s most expensive signing, and a high-profile pre-season spat with the France forward Anthony Martial.

“(Mourinho) is the wrong man for the job,” Sharpe told Press Association Sport.

“When he came to Chelsea the first time he was quite charming and fun, but now he just seems dour and fed up.

“He’s moaned about not signing new players and not bigging up the ones he’s got.

“The football’s not entertaining and what makes it twice as bad is that their two biggest rivals, Man City and Liverpool, do play exciting football.

“His negative style does not fit in with the expansive football that United fans want. I think he’ll be gone before Christmas.”

Sharpe did play for an exciting United team under Sir Alex Ferguson between 1988 and 1996, winning the Premier League title three times and the FA Cup twice.

And the former England winger believes Mourinho has created a lot of his own problems with his abrasive man-management style.

“I do not think Mourinho has handled the Pogba situation very well,” Sharpe said at a McDonald’s community football day prior to United’s weekend defeat.

“It was the same with Luke Shaw before that. Any views should be kept in-house and not appear in the press.

“Mourinho talks about class (he accused Manchester City of lacking it by making their Amazon TV series) but that is the sign of class in my eyes.

“Every player who played for Sir Alex Ferguson – whether they liked him or not – respected him because you knew that any grievances would not be aired in the press.”

Mourinho did not handle Paul Pogba well, according to Sharpe Credit:  AP

United’s shock defeat at Brighton has already left them trailing Chelsea and Manchester City by three points after two games.

Free-scoring Liverpool have also come out of the blocks fast and Sharpe does not expect United to be part of the title race this season.

“They struggled to keep up with City last year and now Liverpool have strengthened their midfield and signed a goalkeeper I see them as the main threat,” he said.

“United have got good players and strength in depth, but they need to be let off the leash.

“They are good enough to be in the top four. But what happens if they fall behind City and Liverpool and are left challenging Chelsea, Tottenham and Arsenal for top four?

“I think United fans accepted second last year because they were behind a City side breaking loads of records.

“But, if they are down in third and fourth and playing rubbish, are the fans and the board, in particular, still going to put up with that? I’m not so sure.”