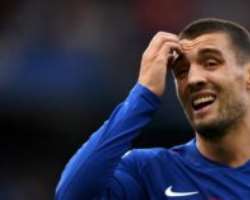 After last year's failed attempt to reinforce the midfield with Tiémoué Bakayoko and Danny Drinkwater, Chelsea returned to the drawing board this summer. The Blues added two “like new signings” in Ross Barkley and Ruben Loftus-Cheek, back from long-term injury and a season-long loan, respectively, and gazumped Manchester City for Jorginho, who had been key to new head coach Maurizio Sarri's plans for the last few seasons at Napoli. But Sarri asked for one more new signing, a midfielder of a “different profile”. Two days before the deadline, Chelsea found him.

As part of the Thibaut Courtois deal, Chelsea received Real Madrid spare part Mateo Kovačić on a loan deal in return. Despite his clear talents, he hadn't found consistent playing time in the three years he spent in Santiago Bernabéu. And so, he forced his way out of Spain. For Sarri, though, he was perfect — a modern midfielder, with the box-to-box skillset of attacking flair and pace paired with good passing skills and defensive nous.

Having been involved in the World Cup final with Croatia, not to mention all the transfer drama, Kovačić got a late start on pre-season. In fact, he's still not quite up to full match fitness. But on Saturday, he made his Chelsea debut, coming on alongside Eden Hazard in the 60th minute against Arsenal, with the score level at 2-2. The two paired up on the left side and proceeded to terrorize the visitors, with Kovačić completing every single one of his 43 passes in the eventual 3-2 win.

Kiyan Sobhani
✔ @KiyanSo
Well, Kovacic wasn’t shy at all in his debut off the bench. 54 touches in just half-hour and constantly demanding the ball. Completed every single one of his 43 passes as well.

Twitter Ads info and privacy
After his almost immaculate debut at the Bridge, the 24-year-old stopped by for a chat with Sport Klub, and revealed how happy he is to have joined his new team, where he's found exactly what he had been looking for.

“Well yeah, first of all it was important that after 3 years of inconsistency in playing time in Madrid I've got into a team that wants me and a coach that wants and trust me, that's how Chelsea happened. That's what I really need now, as I said earlier I'm feeling really good and I want to keep it that way.”

Sarri's tactics in Napoli — known as “Sarrismo” in Italy — drew loads of attention and praise from all corners of the footballing world. Kovačić was keenly aware as well, as he bided his time lost in the middle of Real Madrid's depth chart.

“Well yeah, he knows me for a long time, I've watched a lot of his games, he likes to play and that's what matters in my opinion. The squad is phenomenal with many great players that's why it wasn't so hard to adapt quick.”

Many players struggle to make the transition from La Liga to the Premier League, often citing the physical nature of the English game as an impediment to their footballing abilities. Kovačić, often referred to affectionately as a “Beast”, isn't too concerned about that aspect at all. In fact, he's not concerned with adapting at all.

“Well, the tempo is higher, there is more space, but as I said it's not hard to adapt when you are surrounded by great players. I would thank to all fans that support me and I will make sure I payback on the pitch.”

That payback will probably have to come in small increments to start with. Having held out of training in Madrid to force a move (a mirror-image of Courtois in that regard) and still getting used to new surroundings and a new style of play, he's a bit behind the curve in fitness and knowledge.

“First of all I'm happy about the win and that's the most important thing, it's good that the team is playing well so it's easy to adapt but I'm still out of rhythm since I've just joined the squad, but I'm working well and I'm improving and that's what matters.”

Twitter Ads info and privacy
Match fit or not, Maurizio Sarri is happy with what he got on Saturday from both Kovačić and Eden Hazard, who provided Chelsea the edge to break Arsenal in the final minutes of the game.

“Yes, I think in this moment they are not able to play for 90 minutes, so I think it's better 25, 30 minutes when the intensity of the game is going down. Hazard did very well, like in the other match [against Huddersfield]. Two matches, two assists, so for us very useful, very important.”

“And I think Mateo can become a great player here.”

-Maurizio Sarri; source:  BBC
That last bit, about becoming a great player here, is quite tempting. Is Sarri perhaps suggesting that this one-year loan might actually be more than that?

Real Madrid insist that there's no buy option. Kovačić himself gave Real fans  a farewell message that sounded very much like he has no intention of going back. We'll have to wait until next summer to learn the true story. In the meantime, we have a full season to enjoy a midfield that promises to be one of the best in England, if not all of Europe.

While we wait for Newcastle and another Kovačić outing next weekend, here's a nice way to while away the time — an all-touches video from the Arsenal game.