Sarri not aiming to repeat Napoli formula at Chelsea 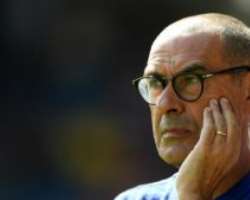 Maurizio Sarri feels Chelsea will continue to improve under his stewardship, but the club’s new coach will not aim to repeat his winning formula from Napoli.

Sarri’s side pushed Juventus hard for the Serie A title last term but ultimately fell short as the Bianconeri won a seventh straight league title, but Chelsea were impressed enough to appoint the 59-year-old as the successor to fellow Italian coach Antonio Conte for the 2018-19 season.

And although the Blues thrilled in a 3-0 opening-day win away to Huddersfield Town on Saturday, Sarri believes there is more to come.

“I don’t want to do another Napoli, I want to do a Chelsea,” Sarri told a news conference. “I have to respect the characteristics of the players, the championship and now I study my players.

“We have to improve to defend in the other half, to press against three defenders. We have to move the ball faster. We did it better in the second half, there was more space and time.”

N’Golo Kante got Chelsea up and running, with a cool Jorginho penalty doubling their lead before Eden Hazard came off the bench to tee up Pedro for the third.

“I think that Eden in this moment cannot play for 90 minutes, he needs to have training,” Sarri said of the Belgium star. “The best thing for him was to play 15-20 minutes when the opposition was tired.

“I am very happy because in the first part of the season for us it is not easy to gain points. The first half was hard. If you look at the result you can think of an easy game.

“We were in trouble for 15 minutes against a physical team, we are not a physical team. The best capacity was to suffer, but then I think the second half maybe they were tired.”

Huddersfield boss David Wagner accepted his side were roundly outplayed, highlighting defensive errors as contributing to a heavy home loss.

“If we wanted to get something today, we had to be at our very best. We made too many mistakes and missed our chances. I saw our spirit, togetherness and good attitude today, which is what we will need to be competitive this season.

“We started very well, on the front foot, and then the first goal came out of nothing. We made a mistake in our frontline that led to the second goal which cannot happen. We tried and created some opportunities, but Hazard showed his top quality for the third.”

Jorginho’s penalty raised eyebrows and delighted neutrals, the former Napoli midfielder deceiving goalkeeper Ben Hamer with a skip in his run-up before rolling the ball home.

“I don't know, he has always kicked the penalty like this,” Sarri shrugged.