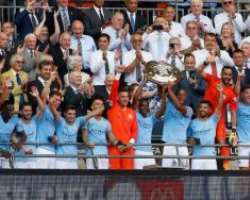 On another baking hot afternoon Manchester City certainly did not look under-cooked. The champions set the standard for the new season as they comprehensively out-played – and not just beat – Chelsea to win the Community Shield.

Manager Pep Guardiola had said he was “starving” for more success and his team looked ravenous. Another trophy has come their way, albeit the fifth of importance that they will contest this campaign, but the resonance went far beyond.

There were two goals for the predatory Sergio Aguero – the first being his 200thfor City – but it was the manner of their construction, and the architects of them, that was so impressive. On both occasions City carved through Chelsea.

Phil Foden, the great young hope at still just 18, created the first and also released Aguero with the pass of the match – a wonderful wedged ball through with back-spin to bring it back to the striker – while John Stones continued his imperious form from the World Cup, just three weeks to the day after returning from Russia, and Bernardo Silva looked like a player trying to prove a point. The only disappointment was an indifferent performance from £60million signing Riyad Mahrez and the confirmation, if any were needed, that goalkeeper Claudio Bravo is not going to be challenging Ederson for his place.

For Chelsea's new manager Maurizio Sarri this was a sobering experience. A bit like the over-size T-shirt be wore Chelsea did not, on this evidence, look like a good fit with his marquee signing of Jorginho struggling to impose himself and Ross Barkley barely involved while it was a miserable day for Alvaro Morata. Jorginho turned down City, of course, to join Chelsea for £57million but this was not a glimpse of what got away.

The Italian will get better and so will Chelsea and not least when they have their World Cup players – N'Golo Kante and, should he stay, Eden Hazard in particular – back but there is work to do for Sarri to impose his bold style. The bright spot? An encouraging hour from 17-year-old Callum Hudson-Odoi and not much else.

The goals said it all. They said it all about the daunting gap between these two sides which Chelsea are trying to close. For the first City built from the back with the ball fed to Foden who strode forward and simply laid the ball off to Aguero. Antonio Rudiger anticipated the return pass, moved to his left and the space opened up for Aguero to drive a low left-foot shot through the defender's legs and into the corner of the net. Good finish; bad defending with Chelsea sitting far too deep.

For Aguero's second Stones intercepted a pass and ran forward with substitute Ilkay Gundogan laying the ball to Bernardo who threaded it through to Aguero who had ran behind David Luiz. Unerringly he side-footed home. It should, in fact, have completed a hat-trick for Aguero who had earlier been released on goal by Foden with his brilliant pass with the outside of his boot but the Argentinean hesitated, rounded goalkeeper Willy Caballero but then shot into the side-netting. Soon after he drew a smart block from his compatriot with a fierce volley.

Such was City's dominance that Guardiola could experiment as he pushed Stones into midfield for the final 10 minutes after bringing on Vincent Kompany while Foden rightly received a standing ovation as he, too, was substituted.