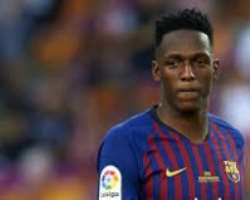 Jose Mourinho has turned his attentions to Barcelona defender Yerry Mina instead of Harry Maguire, according to reports.

The  United  boss is looking to strengthen his back line before the start of the season but with deadline day looming, the club are running out of time to get another signing confirmed before the August 9 deadline.

Leicester defender Maguire is on  Mourinho’s  wanted list but his price tag has rocketed after his impressive World Cup displays and Mourinho is now looking elsewhere, according to The Sun.

They claim United have made checks on Mina’s availability and have made contact with Barcelona insiders to establish how much they would have to pay to bring the Colombian defender to  Old Trafford.

Despite only arriving at the club in January for £10.5m, Mina has struggled for game time and the La Liga giants have bought Clement Lenglet this summer – which has pushed him further down the pecking order.

In other news Napoli’s president has confirmed they have asked United about a loan deal for Matteo Darmian.

Aurelio Di Laurentiis told Radio Kiss Kiss: “We have asked for Darmian on a loan with a right to sign next summer.”

The defender has confirmed he wants to leave the club for more regular football.