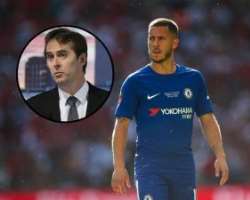 Real Madrid have reportedly 'ended their interest' in signing Chelsea star Eden Hazard, after the Blues demanded a world-record fee in excess of £200million for the winger.

Hazard has been heavily linked with a move to the Bernabeu after his starring role in Belgium's run to the World Cup semi-finals and Cristiano Ronaldo's surprise departure to Juventus.

But with doubts over the future of teammates Thibaut Courtois and Willian in particular, the Blues have been desperate to keep hold of their star player, and it appears their valuation has scared Real Madrid boss Julen Lopetegui off.

The Real Madrid boss remains an admirer of Hazard, but AS report he is ready to shape his team around Isco ahead of the new campaign.

Isco was a regular during Lopetegui's stint as Spain boss and spoke glowingly about the confidence he had given him.

It now remains to be seen what the future holds for Hazard, after he spoke openly about his future at the World Cup.

New boss Maurizio Sarri is determined to keep the Belgian and could offer him the Stamford Bridge captaincy.

However, the news isn't all good for the Blues.
Hazard only has two years left on his current contract and has refused to sign an extension worth £300,000 a week. Courtois too is refusing to sign a new deal as he enters the final year of his deal, and has also been heavily linked with Real Madrid.

Due to the uncertainty surrounding Courtois, Chelsea have today been linked with Everton's Jordan Pickford, but  the Toffees are set to reject any bids for the England no.1 .