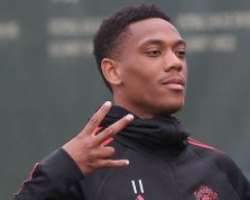 Manchester United star Martial left the club's pre-season camp in Los Angeles yesterday to be with his partner ahead of the birth of his second child.

The France international, who has a daughter from a previous relationship, welcomed baby Swan into the world with girlfriend Melanie Da Cruz today.

Manchester United  are currently trying to resolve the issue of Martial's future, with the player keen to leave for a new challenge elsewhere.

Reports have also suggested that, if he leaves Old Trafford, he wants to stay in the Premier League with Chelsea and Tottenham both keen.

And the Daily Mail say Martial has told team-mates he has no intention of returning to LA.

United drew 1-1 with AC Milan in their third tour match, eventually overcoming the Serie A giants on penalties.

Alexis Sanchez impressed in Martial's absence, with the Chile international showing why Mourinho chose to drop the Frenchman so regularly last season.

The  Daily Mail  say Martial's decision not to return to LA as seen his relationship with Mourinho reach 'breaking point.'

And what happens next, with Chelsea and Tottenham circling, remains to be seen.

The United boss said: “I found out that Martial was going to Paris when he told me. It was two or three days ago.

“When it is personal reasons, everyone analyses that the way he thinks is the correct way.

United want a huge £80m to let Martial go but, because of that, they are struggling to find a buyer.