Ross Barkley feeling 'fitter than ever', ready to impress under Sarri 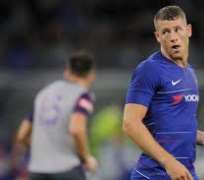 Injuries have taken a heavy toll on Ross Barkley's career. Once hailed as one of England's best young talents when he surged to stardom at Everton, the 24-year-old has battled several major injuries already in his career, including back-to-back hamstring problems that limited him to just 4 appearances last season.

Switching to Chelsea halfway through the season did not alleviate the issues at the time, but he's now back healthy and raring to go. In fact, he says he's feeling fitter than ever.

“I felt good out there. We have been working for the last couple of days on tactical work and I have worked hard during the off-season. In this game I felt really strong and I am ready for the season ahead. Game by game I will feel much better and ready for the season.”

“I came through a difficult spell with a few little niggles after a long-term injury but now I feel as strong as I have ever felt before, and I am feeling fitter than I have ever felt so yeah, I feel good.”

Renewed fitness could use some renewed backing from the coaching staff. Conte was  famously unimpressed  by Barkley's  first few appearances , but perhaps a clean slate with Sarri will be helpful.

Barkley started Chelsea's first match of preseason, against Perth Glory, as a central midfielder, and he was not too impressive. But once he moved to left winger in the second half, he became one of our best players on the pitch. That sort of versatility can be useful, as long as it carries with it the requisite quality in either position.

“As a young player breaking through at Everton, [left winger] is the position I played in. I was in that position because it gave me freedom to express myself and I understand that role, and I understand the other roles in midfield so I am happy to play anywhere as long as I am on the pitch.”

“It has been very interesting [to work under Sarri]. The style that he wants us to play, it is really exciting and very attacking, as well as being very organised. We have been understanding what he has been getting across in training but the more we do it in training, the more we get used to it and I can see from the training sessions that this season is going to be very exciting.”

-Ross Barkley; source:  Chelsea FC
Certainly a better first appearance for Barkley under Sarri than Conte, and something to build on as we head into the season.