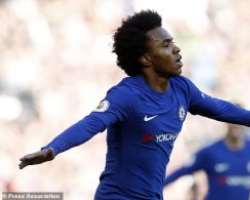 The Football Association has issued an apology after its official FA Cup Twitter account posted an image originally by Chelsea forward Willian which appeared to mock Antonio Conte.

The image posted by the Brazilian showed three trophy emojis placed in such a way as to obscure Conte from a photograph of the whole team celebrating the FA Cup triumph over Manchester United at Wembley on May 19.

The tweet was posted by the FA Cup account at 1222 on Tuesday and was visible for more than three hours before it was deleted.

The caption added read: “Our #WorldEmojiDay Award for Creativity goes to @willianborges88.”

An FA spokesperson said: “We apologise for any offence caused and we have removed the tweet.”

Conte was sacked by Chelsea last Friday and replaced by Maurizio Sarri.

Willian cut a frustrated figure under Conte at times. He started only 20 Premier League matches for Chelsea in the 2017-18 season, featuring as a substitute on a further 16 occasions.

The Brazil playmaker did not start any games after reacting angrily to being substituted in the FA Cup semi-final against Southampton on April 22.

Willian has been linked with moves to Manchester United and Barcelona.