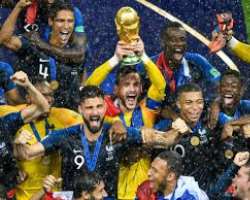 Exactly $400 million will be dished out by FIFA in prize money to the 32 teams who competed in the 2018 World Cup, which is a $42 million increase from the tournament in 2014.

With the winners getting $38 million and the runners up $28 million, the four semifinalists were the big winners with Belgium winning $24 million and England getting $22 million. The four teams who were knocked out at the quarterfinal stage each received $16 million, while the nations who reached the last 16 earned $12 million each.

For simply qualifying for the tournament and reaching the group stage, the 16 teams who didn't make it to the knockout rounds received $8 million.

Below is a breakdown in full of which countries earned what as France took home a cool $38 million as winners.