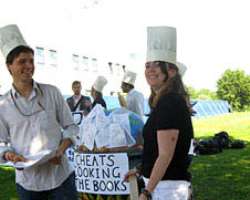 By Richard Black
UN climate talks have ended, with delegates speaking of an improved mood but with major gulfs remaining between various blocs.

A last-minute spat between Russia and Japan and the G77 bloc of developing countries showed the differing goals in play at the talks in Bonn.

But six months after the fractured Copenhagen summit, some were relieved that the process remained alive.

Many delegates played down prospects of a new UN deal by the end of this year.

The last day saw publication of a new document covering many of the most contentious issues, which may eventually form the basis of a negotiating text going forward to the next UN climate summit, to be held in Cancun, Mexico, at the end of the year.

“Fifty-fifty is what I'd give this last week,” said Grenada's delegation chief, Dessima Williams, chair of the Alliance of Small Island States (AOSIS).

“We really revived a spirit here of wanting to work, of rebuilding confidence and trust,” she told BBC News.

“But the [new] text did not accommodate sufficient views, and is very imbalanced in favour of developed countries.”

Many other developing country delegates agreed; while on the other side of the coin, the US said some elements were “unnacceptable”.

Yvo de Boer, the outgoing executive secretary of the UN climate convention (UNFCCC), made one last plea to Western nations to raise their game.

“The fact remains that industrial country pledges fall well short of the 25-40% range [from 1990 levels by 2020] that the Intergovernmental Panel on Climate Change has said gives a 50% chance to keep the global temperature rise below 2C,” he said.

“It's essential that current pledges grow over the next few years, otherwise the 2C world will be in danger, and the door to a 1.5C world will be slammed shut.”

Public disagreement
The meeting was prolonged many hours by a dispute concerning a proposed workshop to examine further emission cuts under the Kyoto Protocol, which involves all developed countries except the US.

Russia, with Japanese support, argued that the workshop should cover emission cuts by all countries.

What might appear a minor issue became a major sticking-point, with developing countries insisting that the rich countries had a historical duty to review and increase their emission pledges.

Such issues have dogged the UN climate process for years, and led Artur Runge-Metzger, the European Commission's chief negotiator, to ruminate on what might transpire in Cancun.

“The worst case is we would not see an outcome, we would not be able to conclude on the many items we are discussing,” he said.

“What the chances are of this is hard to say, but there many be things that are pointing not to convergence [between blocs] but to divergence.

“We heard demands for example that 6% of our GDP should be transferred from rich countries to poor – these are extreme demands and… we only have two weeks negotiating time left before we meet in Cancun.”

On Wednesday, there was an unusually public disagreement between developing countries over whether to commission a technical review of options for meeting the AOSIS-favoured target of keeping the global average temperature rise below 1.5C – a move that the Gulf states blocked.

“The discouraging news is that even as the BP oil disaster continued to unfold in the Gulf of Mexico, some oil-exporting countries – including Saudi Arabia, Oman, Kuwait and Qatar – were so desperate to protect the oil industry that they blocked efforts to expand studies of the climate change problem,” said Annie Petsonk, international counsel for the Environmental Defense Fund.

Mystery surrounded a subsequent incident in which Saudi Arabia's nameplate was apparently broken and placed inside a toilet bowl.

The Saudis demanded an investigation, a request to which the UNFCCC agreed, with delegations of all flavours condemning a serious breach of diplomatic etiquette.

But who was behind it remains unclear; and photos that are heavily rumoured to exist were kept under wraps.

The UN process reconvenes in August for a week-long meeting in Bonn; there is likely then to be another preparatory meeting in China in October before eyes turn to the Cancun summit.