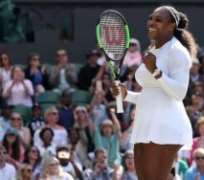 In the interview room on Tuesday, Serena Williams was asked what first lesson she would pass on to her 10-month-old daughter Olympia. Her answer was a little clichéd, she admitted, but no less valid for that. “Never quit.”

The point was neatly demonstrated on Centre Court on Tuesday as Williams played her first quarter-final at any event in 18 months. Her opponent, the undersized Italian Camila Giorgi, blitzed the first set with her incongruously violent hitting, and could easily have turned in an upset on another day. But Williams simply wasn't having it.

“It was just the way I felt today,” Williams added. “I never felt it was out of my hands. It’s weird. I can’t describe it. I just felt calm. Hoping I can channel that all the time, but one day at a time.”

After a week of largely underwhelming matches on Centre Court, this was at least a showdown for the fans to get excited about. You couldn't call it a contrast of styles, because both women were hammering serves and returns so venomously that only 20 per cent of points lasted more than four shots. But it was certainly a contrast of physiques.

Williams is arguably the most muscular player on the women's tour, whereas Giorgi looks like she is built from pipe-cleaners. Still, she has the same extraordinary flexibility that Denis Shapovalov brings to the men's tour, having trained as a gymnast when she was small.

Giorgi generates extraordinary racket-head speed with her fluid swings, and her first-serve average of 112mph actually beat Williams's 105mph, even if Williams came up with the second-fastest individual serve of the tournament – a 122mph ace down the 'T' – to demonstrate that she is fully recovered from the right pectoral injury she sustained in Paris.

Giorgi says that she doesn't bother following women's tennis, and it doesn't look like she thinks too hard about it either. She only has one setting – full on. Receiving serve, she met Williams's first delivery just inside the baseline and the second even earlier. It was an uncompromising approach, and she didn't vary it even though the rewards were hardly forthcoming. In 14 return games, she won just 14 points.

Giorgi's post-match chat was equally direct, as she managed only 57 words in the English section of her interview. “I play a great level today,” she said. “I did a great week, yes.”

Fair enough, as there was little more she could have done. Williams might have helped her out in the first set, donating the sixth game via three miscued backhands and one forehand into the net. But after that there were previous few freebies, as Williams backed up her status as the runaway Wimbledon favourite with a superbly controlled performance.

“I think I learned the lesson of never giving in, always fighting,” said Williams, who was watched by the rapper Drake as well as a Royal Box line-up that included Billie Jean King. “I feel like it’s really important in life, no matter what you’re going through, to never quit.

“I’ve always embraced being a role model. I think for me I just fell into that perfectly. Now that I’m a mum, I just want to even be more of that role model for my daughter, for lots of kids out there, people out there that just want to be inspired.

Ball boy and ball girls
“Here is some good news. Right now there’s so much bad news in the world. We just need a good story.”

At No 52, Giorgi is the highest-ranked opponent that Williams has faced on her way to the semi-finals. On paper, the competition should hot up significantly against 13th seed Julia Goerges. But let's not get ahead of ourselves.

At 29, Goerges is playing her first major semi-final, having never gone beyond the last 16 at any slam before. And Williams also has the reassurance of having beaten Goerges comfortably in Paris a month ago, when she was considerably less well-conditioned than she is now. In three previous meetings between these two, Goerges has never come close to winning a set.

Now that Williams is into the last four, and seemingly bearing down on an eighth Wimbledon title, will there be any special visitors from the far side of the pond? Donald Trump has been discussed as a possible attendee – a prospect that Williams has treated with disdain. She is much more enthusiastic about the possibility of seeing her friend Meghan, Duchess of Sussex. Could there be a royal presence in the Royal Box this weekend?

When this question cropped up on Tuesday, Williams drummed her fingers on the table and replied “Just stay tuned, right? Stay tuned for the next episode, Serena Williams on Centre Court.”

Another 118mph ace sets up three match points. Giorgi sends a shot into the net and Williams lets out the beaming smile we know so well.

Giorgi should be proud of her performance in this her first quarter-final at a grand slam. She forced Williams to respond to the pressure and raise her game to get the win.

Williams will play her 11th semi-final at SW19 on Thursday.