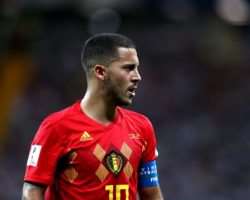 Belgium winger Eden Hazard is a man of many talents, including the ability to predict this World Cup.

As the Chelsea star prepares for his country's World Cup semi-final with France, an Instagram post from before the tournament has resurfaced.

Hazard posted a wallchart with his predictions for this summer's World Cup, which saw him correctly guess three of the semi-finalists, as well as getting other results right along the way.

In the round of 16 he correctly predicted that England would beat Colombia, Brazil would overcome Meixco and Uruguay's victory over Portugal.

Then in the quarter-finals he said Belgium would get the better of Brazil, which they did, and that France would prove too strong for Uruguay.

The results of Friday's games mean that he correctly predicted one side of the draw, whilst the other side saw him guess an England v Argentina semi-final – that did not go to plan.

And if mystic Hazard's form continues, we could be set for a mouth-watering Belgium v England final next Sunday, let's just hope that his prediction of the winner does not come to fruition.