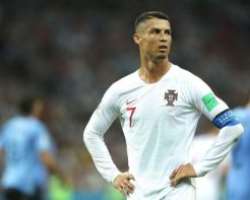 Could Cristiano Ronaldo have really played his final game for Real Madrid?

According to the BBC, Real Madrid are mulling a mind-blowing  $116 million offer  from Juventus for Ronaldo. Other reports, from both Italy and Spain, have stated Juventus will offer the Portugal star a  four-year contract  worth $35 million per season. It's unclear whether this number is before or after taxes, but it would still make Ronaldo by far the highest-paid player on the club, with Gonzalo Higuain making just under $9 million per season after tax.

While the move is eye-popping for so many reasons, it could also make a little bit of sense.

For the third-consecutive year, after winning the UEFA Champions League final, Ronaldo has complained about his current contract, and hinted he'd be willing to leave for a better deal. The one from Juventus would certainly be as much if not more than Ronaldo makes now.

In addition, he'd be joining a club that's another regular in the Champions League knockout stages, which would keep Ronaldo's chances of winning an incredible fourth-straight UCL title alive.

Third, Italy's Serie A is played at a slower pace and isn't as talented across the board as La Liga is, meaning the 33-year-old Ronaldo can conserve more energy for the crucial Champions League matches.

Ronaldo is Real Madrid's all-time leader in goals with 451 and is arguably the greatest player in the club's history, so it would be hard to see Real Madrid selling him. But for $116 million, which is more than I'm sure they presumed they could get for him on the open market, it may be enough to turn their heads.