Giwa takes over NFF as FG asks Pinnick to quit 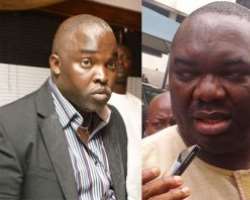 •Move may lead to FIFA ban —Keyamo
Nigerian football politics took a new twist on Monday, when Chris Giwa resumed at the Glasshouse of the Nigeria Football Federation in Abuja, as the president of the football body.

Giwa, who was elected as NFF president on August 26, 2014, has been locked in a leadership tussle with the Amaju Pinnick-led NFF board, after an order from a Jos High Court had stopped the election which brought Pinnick to office on September 30, 2014 in Warri, Delta State.

Giwa reportedly resumed at the Glasshouse with armed policemen to enforce the Supreme Court judgment.

Giwa arrived at the NFF office around 11am and went straight to the offices to greet the staff on duty before addressing them in the boardroom.

Giwa declared that he would not waste time deliberating on past events, and immediately reeled out his plans for Nigerian football.

He promised to support all the national teams particularly the Falconets, who  compete at the 2018 U-20 Women's World Cup in France next month.

He added that his board had no plan to disrupt the Nigerian Professional Football League as they are preparing to kick off again after the World Cup break.

“We are here today (Monday) by virtue of the mandate we got at the Annual General Assembly of the NFF that took place on 26th August 2014 at Chida Hotel (Abuja), where we were elected into the NFF Executive Committee to serve for four years.

Giwa's takeover comes after the Ministry of Youth and Sports directed the NFF to comply with the judgment of the Supreme Court delivered on April 27, which restored the orders of the Federal High Court setting aside the purported election into the Executive Committee of the NFF held on September 30, 2014.

Sports minister Solomon Dalung, in a statement from his media aide, Nneka Anibeze, said the directive followed a written notification signed for the Attorney-General of the Federation and Minister of Justice requesting the Ministry of Youth and Sports to ensure compliance.

Dalung stated, “I have been directed to notify you of the orders dated June 5th, 2018, made by Honourable Justice M. H. Kurya, sitting at the Federal High Court, Jos, in respect of the above-mentioned suit between Yahaya Adama vs Aminu Maigari, which states that the election of the NFF held on August 26, 2014, under the leadership of Chris Giwa, be given recognition pending the hearing and determination of the motion on notice filed in this case and that the purported ban of the Executive Committee elected on August 26, 2014 from football activities of the NFF is unconstitutional, null and void.

“It is trite law that court orders are sacrosanct and any act of disobedience to it constitutes a threat to the rule of law. Consequent upon the above, you are hereby advised to comply with the orders of court made therein, which for now, is the valid and binding order of court, in the absence of any other subsisting order or judgment to the contrary.”

Dalung added, “This is a court order and not from Dalung. I will not want to go to Kuje prison because of disobedience of court orders. Therefore, I hereby comply with the court orders of June 5th 2018, while Mr Amaju Pinnick and others are also directed to comply with same.”

However, Festus Keyamo (SAN), Pinnick's legal representative, said the court order was not binding on his client's led board.

“Whilst our clients respect the sanctity of court orders, unfortunately the said court orders are not binding on FIFA, the World Football Governing Body. The NFF is an affiliate of FIFA. It should be noted that FIFA has consistently maintained that this same matter has been taken to the highest Court of Sports Arbitration in Switzerland by these same individuals and they have lost,” Keyamo said in a statement.

He added, “The obvious implication of all these is that if any attempt is made to recognise Chris Giwa and derecognise Amaju Pinnick and his board, FIFA will definitely impose a lengthy ban on Nigeria from all football competitions locally and internationally and that will spell doom for Nigerian Football.