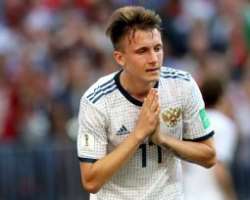 Chelsea are reportedly closing in on the signing of World Cup star Aleksandr Golovin after Juventus pulled out of the race. Golovin has been a stand-out figure in Russia's superb World Cup campaign which saw the hosts knock out European giants Spain in the last-16. Russia dumped Spain out thanks to a disciplined defensive display and Golovin scored for his country in a tense penalty shoot-out after extra-time. MORE: FOOTBALL Mohamed Salah signs new long-term contract with Liverpool Marcus Rashford speaks out on England’s World Cup penalty shootout preparation Andres Iniesta confirms international retirement following Spain’s World Cup elimination Golovin's performances has attracted the attention of Manchester United, Arsenal and a host of other big clubs across Europe, but the 22-year-old is under contract at CSKA Moscow until 2021. Goal claim CSKA were in talks with Juventus, but could not agree a transfer fee and the Serie A side has now moved onto other targets. Chelsea are now set to snap up Golovin after Blues owner and Russian billionaire Roman Abramovich assured CSKA his side could meet their asking price for the midfielder.

CSKA want around £27million and Abramovich has promised Chelsea will be able to meet or come close to that valuation. Juventus were surprised by Chelsea's sudden interest in Golovin and are not keen to get in a bidding war with the Premier League side. Golovin would be Chelsea's first summer signing and could mark a turning point for the London club.