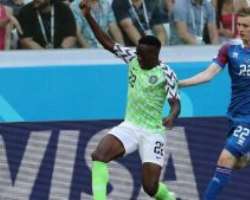 Former Nigeria U-17 and U-20 coach John Obuh was not surprised by the composed and committed display of Kenneth Omeruo against Iceland on Friday in Volgograd.

Omeruo, 24, probably had his best game for Nigeria in a five-year international career, his sparkling statistics on the day doing justice to those claims.

Obuh, who handed Omeruo his first taste of international football at the 2009 FIFA U-17 World Cup hosted by Nigeria and subsequently promoted him to the U-20 category two years later, reckons he has been vindicated by the player’s impressive performance.

“I am not surprised by Kenneth’s performance on Friday. Unfortunately people don’t look at football history, experience, but rather get carried away by events of the moment,” Obuh told KweséESPN.

“I had earlier called for his inclusion in the team when he was sidelined by Gernot Rohr because this is a player I have coached from the age-grade tournaments and I know his strengths and qualities, but rather than looking at it from a professional angle, the majority said it was because he is my player.

“Remember, he was on the verge of been dropped after falling down the pecking order in central defence. However, I am glad Rohr didn’t make that mistake considering he is our most experienced central defender, and only second to Elderson Echiejile in the entire defensive line.”

Obuh, who incidentally included both Omeruo and match-winner Ahmed Musa in his team at the 2011 FIFA U-20 World Cup in Colombia, emphasised on the need for the coaching crew to field players with prior World Cup experience, as the synergy built up over the years could count for something on football’s biggest stage.

“After the Croatia defeat, I knew we had to get the senior players more involved for the subsequent games to stand a chance of progression, and good enough Musa and Omeruo were handed starts,” he continued.

“Omeruo and Musa have played together from their Flying Eagles days, dating back to seven years, hence it was only normal for him to know where Musa wanted the ball, which led to his assist for the second goal.”

Indeed it is quite an impressive turnaround for a player who had lost the trust of Nigerian fans due to being tagged error-prone, but Omeruo marked his first Nigeria start in 15 months with a composed and committed display that coincided with the Eagles keeping a first clean sheet in six straight games.

Despite seeing his playing time greatly reduced under Rohr, Omeruo has managed to ensure the team have kept clean sheets whenever he gets the minutes, notably in second-half appearances against Argentina and England, as Nigeria deployed a back three in defence on both occasions.

His latest outing on the left side of defence together with Leon Balogun and William Troost-Ekong, according to Obuh, further highlights his versatility, reliability and sparkling qualities which are often overlooked due to some past mistakes.

“I played him in three different positions while with the U-20s. He featured as a right-back, left-back, central defender, and Omeruo always excelled in whatever position he found himself playing,” a pleasantly satisfied Obuh added.

Hopefully, the experienced 39-cap Nigeria international will build on his newfound confidence, positioning, aerial dominance and intelligent tackling as Nigeria go in search of a first World Cup point against Argentina, which would secure a fourth qualification for the round of 16.