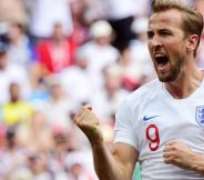 England's Harry Kane rocketed to the top of the 2018 World Cup goalscoring charts on Sunday, netting a hat-trick against Panama to overtake Cristiano Ronaldo and Romelu Lukaku.

The Tottenham striker scored his third and England's sixth, deflecting a Ruben Loftus-Cheek shot into the net, before he was taken off and replaced by Leicester striker Jamie Vardy.

England look certain to qualify for the last 16 along with Belgium, whom they face in their final Group G fixture on Thursday.