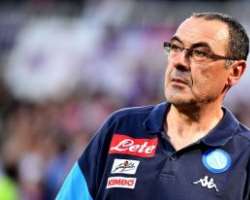 Maurizio Sarri has told Chelsea he wants to sign Gonzalo Higuain, Dries Mertens and Kalidou Koulibaly as he prepares to take over as the club's new manager. The saga surrounding current boss Antonio Conte appears to be over after Napoli defender Koulibaly said Chelsea would be in good hands with Sarri in the Stamford Bridge hot-seat. Conte, who won the Premier League in his first season in England, was expected to be sacked in the aftermath of Chelsea's FA Cup victory over Manchester United at Wembley.

Chelsea expect Sarri to replace Conte in the coming weeks and Goal say the club have spoken to their prospective new manager about his transfer preferences. Sarri, 59, is naturally an admirer of several of his former Napoli players and intends to bring a number of them to Stamford Bridge with him. Sarri is keen to bring Dries Mertens to Stamford Bridge (Picture: Getty) Prolific striker Gonzalo Higuain is another target for the incoming Chelsea boss (Picture: Reuters) It is claimed he is keen for Chelsea to pursue centre-back Koulibaly, forward Dries Mertens and striker Higuain, who left Napoli to join Juventus in 2016.

The Blues have also shown interest in Jean-Michael Seri, the Nice and Ivory Coast midfielder, and Poland ace Robert Lewandowski, but speculation over Chelsea's management situation has prevented the club from making their first signing of the summer. Chelsea's current players are also reportedly anxious about the situation, knowing their futures could be affected by the incoming manager.

David Luiz, Thibaut Courtois, Eden Hazard and Willian are among the players being linked with departures this summer. Conte will leave Chelsea having won the Premier League and FA Cup in his two years at Stamford Bridge. He will likely return to his native Italy.