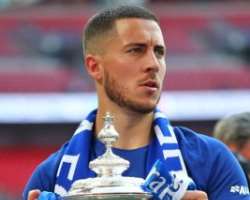 EDEN HAZARD has issued his demands to Real Madrid and Chelsea as uncertainty over his future grows.

Chelsea are desperate to keep Hazard but Real Madrid believe they can prise him away from Stamford Bridge.

Speculation over his future has rumbled on for months, with indecision at Chelsea over whether or not to keep manager Antonio Conte not helping matters.

Chelsea  would likely demand north of £100m from Real in order to let Hazard leave.

And the Belgium international has revealed both clubs are aware of what he is demanding.

“If Real Madrid want me they already know what they have to do,” Hazard said ahead of Belgium's first World Cup clash against Panama today.

Do they interest me? Yes, maybe.
“If I stay at  Chelsea , then the team have to do better than they did last season but in London I have won everything and where I am at this point of my career is thanks to Chelsea.

“To say ‘I’m leaving’ would be too easy, so first I want to see what will happen at Chelsea next season, I want to see if the coach continues or not.”

But the Blues need to line up a replacement and that is proving difficult.

A move for Maurizio Sarri would cost at least £7m to release him from his Napoli contract.

Laurent Blanc and Luis Enrique are both out of work and available.

But Chelsea would also have to pay the remainder of Conte's contract – around £9m – to replace the Italian.

Conte has been linked with a number of new destinations but posts at Real Madrid, Napoli, PSG, Juventus and even Italy are all now settled.

As for Real, their new manager Julen Lopetegui is set to be heavily backed by president Florentino Perez in the transfer market.

The club, which won a third straight Champions League only last month, are expected to raise transfer funds with the sale of Gareth Bale this summer.