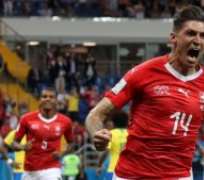 Former champions draw 1-1 with Switzerland after holders Germany were shocked by Mexico in earlier match.

A second-half header from Steven Zuber cancelled out a sensational early goal from Philippe Coutinho as Switzerland and Brazil drew 1-1 in a tight Group E World Cup opener.

With 20 minutes gone on Sunday, Coutinho gathered a clearance 25 yards from goal and curled a marvellous shot into the far corner off the post to give the five-times world champions the lead.

However, Switzerland, who had looked toothless throughout the first half, got back on level terms five minutes into the second period when Zuber rose unmarked to head home a corner kick. Coutinho had Brazil’s best chance after the break but shot wide.

The result means that Serbia lead Group E after beating Costa Rica 1-0 earlier in the day.

Earlier, defending champions Germany crashed to defeat in their first game at the World Cup as an enterprising Mexico refused to be intimidated by history and ran out 1-0 winners in a thrilling Group F opener.

A shaky warm-up campaign had called into question the dominant form the Germans showed in qualifying, but experience and records were on their side, having won every opening game at major tournaments since Joachim Loew took over as coach in 2006.

Juan Carlos Osorio’s side had other ideas, however, holding their own against the favourites’ fearsome but slowing midfield and finding space at the back and seeking to end 33 years without a win against Germany.

After wasting a handful of first-half chances while living dangerously in their own half, Hirving Lozano’s 35th-minute strike on the break proved just reward.

“Our motto was play with the love of winning and not the fear of losing,” said a delighted Osorio.

For Loew, “we played badly”, gave the Mexicans too much space, lost too many balls and rushed chances under pressure.

“It’s an unfamiliar situation,” he said, while insisting the team “has enough experience to not go under with one defeat”.