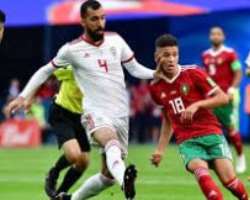 With 10 minutes remaining in their  2018 World Cup  opener, and goals still eluding both, Morocco and Iran knew that a draw would not do them any good.

With Spain and Portugal looming in Group B, each team knew that Friday's match was their best shot at three points. Each knew that it needed a goal. And Morocco, in dramatic fashion, got it.

Unfortunately, Aziz Bouhaddouz scored that goal at the wrong end.

In the 95th minute – the fifth of six minutes of stoppage time – Bouhaddouz mistakenly powered a diving header into his own net:

The own goal gave Iran its second-ever victory at a World Cup, and first of the 21st century.

It also completely overhauled the equation in Group B. Friday's battle of European giants, which kicks off an hour after Morocco's nightmarish error, is now extremely important.

Morocco's Aziz Bouhaddouz scored a 95th-minute own goal to give Iran a 1-0 win in Group B at the 2018 World Cup. (Getty)

Pressure on Spain, Portugal
The Group B showdown between Spain and Portugal was already the  group stage's headliner . But Iran's victory raised the stakes. Because the loser of Friday's clash of favorites, if there is one, is no longer a favorite.

And that matters, because the loser is not only staring at a three-point deficit. In a miniature three-game round robin,  game state principles  apply to the group as a whole. If Portugal beats Spain 2-0, Iran won't just sit above the Spaniards in the Group B table; Iran will essentially be playing with a lead from kickoff when it meets Spain on Matchday 2. Spain will know it must win, or else it'll be left to hope for help, and to overturn a three-goal differential on the final day. Iran will be able to play as if it has a lead. And that's when Team Melli excels.

Similar dynamics could be in play on Matchday 3 if Portugal is the loser on Friday. And the Portuguese especially are ill-equipped to play from behind.

At the very least, there will be pressure on Spain and Portugal to avoid a heavy defeat on Friday. Either can probably afford to lose 1-0. They can't afford to lose 4-0 – like Portugal did against Germany in its 2014 World Cup opener, a defeat that ultimately condemned it to a group stage exit.

Iran, the biggest underdog in the group, is suddenly a contender for a knockout round berth. And if things break right, it might just need one more point to pull off the biggest upset of the World Cup.