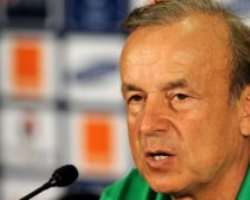 Nigeria’s starting XI to play against Croatia in their World Cup opener on June 16 is set, according to head coach Gernot Rohr, though he says he will play his cards close to his chest until the last minute.

“We have our team in our head already, but we will wait until the last moment to publish the team that will start the game,” Rohr told the media on Wednesday.

The  Super Eagles  suffered three straight defeats against  Serbia, England and Czech Republic  in friendlies ahead of the World Cup, but Rohr says the results are not as important as the objectives behind the games.

“This was good preparation and it gives us the possibility to see who was really fit physically, and who has to work more,” the German added.

His captain, John Mikel Obi, explained that the games were needed to try out new things.

“But we know how we play, we know what we can give. Now it’s the tournament and we have to focus on the tournament. We want to be Nigeria and play our way, and hopefully we can do that on Saturday.”

Rohr feels that the team is now tactically ready for that first game, saying: “We know what we want to do. We saw, of course, the Croatia team playing the two last friendlies, just like they watched what we did against England and Czech.

“It is very important to be in the right moment in terms of games and motivation for this young team.”

Nigeria’s game against Croatia  kicks off at 9pm (CAT) in Kaliningrad.