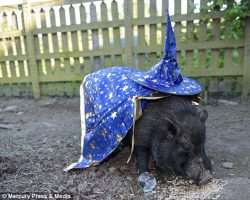 Meet the psychic pig who has a history of sniffing out a winner – and is hoping to continue his unbroken record for this summer’s World Cup.

Mystic Marcus has a 100 per cent track record of predicting sports results according to his owner Juliette Stevens.

The black micro pig has previously guessed the winner of the 2014 World Cup and the Wimbledon tennis finals by picking apples. +7
After eating Argentina, right, he sniffed out Saudi Arabia and Iran before choosing Nigeria

And the eight-year-old prophesier even predicted Brexit and that Donald Trump would win the US presidential election.

Now Mystic Marcus is putting his skills to the test once more by forecasting the semi-finalists for this summer’s World Cup in Russia.

With bad news for England fans, Mystic Marcus expects Belgium, Argentina, Nigeria and Uruguay to make it through.

Farmer and micro pig breeder Juliette from Heage, Derbyshire, said: ‘Marcus is the seventh child of a seventh child and apparently they’re gifted with special powers so maybe that’s where it comes from.

‘A few years ago I was invited on a radio show because of Paul the octopus predicting results and they wanted to see if I had any animals that had the ability.

‘I hadn’t tried the seventh child theory out so thought I’d give it a go. Unfortunately for Gareth Southgate, his chances of World Cup glory were shattered by the pig ‘They used apples and oranges and Marcus predicted the football results, it was amazing.’

Juliette, 50, said after that first result they changed the method to make it more scientific.

Now Mystic Marcus, who has about 30 children and grandchildren, will pick from apples of a similar size and colour to make it as fair as possible.

The apples will include markers – such as pictures or flags – and Marcus will gobble down the winner.

Mother-of-three Juliette said: ‘He started predicting quite a few things, the most hilarious was when he predicted Brexit.

‘At that stage nobody thought Brexit would happen so I was convinced he’d got it wrong.

‘He also predicted Trump would win. I said “Marcus you’ve definitely got that wrong” and then look what happened.

‘He had apples with a picture of Trump next to one and Hillary Clinton next to the other and he ate the Trump apple.

‘For one football match he didn’t eat any of the apples and it turned out to be a draw. It’s really bizarre.

‘I can’t remember which team it was but in the last World Cup there was a team that nobody thought would win a game – not in a million years and he got it right.

‘He correctly predicted that they wouldn’t go up to the premiership and that provoked a lot of anger among fans who said they wanted to turn him into a bacon sandwich.

‘He has a 100 per cent track record, I think he’s got to get it wrong one day but he never does.

‘Let’s hope he can do it again this time round.’

Juliette has around 100 animals on her farm including 19 alpacas, 26 Gloucester Old Spot and micro pigs, eight cows, two donkeys, eight goats and 50 chickens – with Marcus holding a special place in her heart after she bred him.

Juliette said: ‘He’s got a lovely personality – he’s totally unfazed by all the fuss. He’s really chilled out and happy to go and do stuff. He takes it all in his stride.

‘That’s passed on to his children who are all happy and chilled out.

‘When I get home he’s always sat outside waiting for me.

‘He used to come in the house and help himself to stuff from the fridge – all my pigs did but I’ve since rescued a bull terrier dog who wants to kill anything that gets in her way so he’s staying outside for now.

‘It’s a bit of a mad house.’
According to betting company William Hill the odds on Belgium making it to the semi-finals are 7/4, Argentina 13/8, Nigeria 33/1 and Uruguay 4/1.

The English-born mollusc correctly predicted the outcome of eight matches during the competition – including the final – from his tank at the Oberhausen Sea Life Aquarium in Germany.

Staff at the aquarium fed Paul mussels carrying the colours of either Germany or their opponents during the competition. Whichever mussel Paul ate first went on to win the game. +7
Paul the Octopus, pictured, became a household star during the 2010 World Cup +7
He correctly predicted the results of all of Germany’s games before deciding on Spain to beat The Netherlands in the final in Johannesburg on July 11, 2010

Unfortunately, Paul died in October 2010 aged two-and-a-half and without passing on his rare talent to any offspring.

According to AFP a Chinese monkey known as Geda also has a gift for predicting the future.

He successfully backed Donald Trump to defeat Hillary Clinton in the 2016 presidential election.

He also picked Portugal to win the European Championships of the same year.