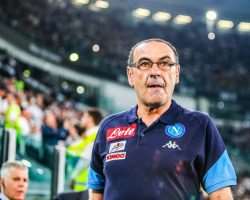 Napoli are willing to drop the price for Maurizio Sarri to £4.5million to encourage Chelsea to appoint their former coach.

Sarri has already been replaced by Carlo Ancelotti at the Serie A club but remains under contract for another two years.

A £7m buyout clause in his deal expired on May 31 – and Napoli are left with the prospect of paying him for two more years after potential moves to Borussia Dortmund, Zenit St Petersburg and Real Madrid fell through.

Chelsea are interested in adding Spain defender Raul Albiol to any deal but have still to part company with Antonio Conte.

Former France and PSG coach Laurent Blanc remains a fallback option, while Argentina coach Jorge Sampaoli is now in the mix too.

The 27-year-old ex-Manchester City centre-back has been at Atletico for three seasons since joining from Fiorentina in 2015.