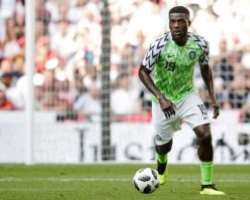 A second defeat in as many games leaves Gernot Rohr with plenty of work to do in the days before Nigeria travel to Russia for the World Cup.

A lethargic first half was followed by a slightly less downbeat second as the Super Eagles imposed their authority on the Czechs, but ultimately failed to find satisfaction.

Apart from Francis Uzoho, there were no real standout performances and Rohr has quite the task ahead of him as he races against time to get his squad ready for the opening game against Croatia on June 16.

This is how the players fared:
Francis Uzoho – 8
The young goalkeeper just keeps getting better. This has got to rank as his best game yet. Came up with three point-blank saves and never looked out of position. Even had the confidence to give his defenders an earful on occasion.

Shehu Abdullahi – 6
Much improved performance from him than against England. Made some great blocks, tracked his man, and even raced into the centre on one occasion to make a shot-saving clearance.

Bryan Idowu – 5
Not his best day at the office. Bounded into good attacking positions but twice took the wrong decision of going for goal rather than laying a simple tap-in for Odion Ighalo.

Leon Balogun – 6
Defended with his usual bloodlust but nowhere to be found on the goal to react to the rebound from Uzoho. Provided a goalscoring threat at set-pieces.

William Troost-Ekong – 6
Along with Balogun, needs to do a better job of organising the defence. Made good decisions, but like his centre-back partner, nowhere to be found on the goal.

John Ogu – 8
Excelled in his first start since November when he played against Algeria. Was always around to cover for advancing teammates, plug holes, mop up in the box, or head out dangerous balls, and also carried an aerial threat in the opposition box.

Wilfred Ndidi – 7
Ndidi showed what he brings when fully fit. Great ability to read the play and tackle, play-breaking and one stinging half-volley on goal that would have ended up in the net if it was on target.

John Mikel Obi – 6
Played even freer than usual but kept running into traffic. Double-teamed by the Czech players on a regular basis, he just could not find any good outlets and his day was almost made doubly worse when he nearly headed past Uzoho for an own-goal before Shehu intervened.

Alex Iwobi – 7
Appeared to have been given a licence to roam by Rohr. Popped up just about everywhere. Led an early fast break that was cut off by the Czechs.

Victor Moses – 7
Along with Iwobi, provided the biggest threat for the Nigerians, but just could not find a breakthrough. Took set-pieces, but most went awry. Needs more work on those.

Odion Ighalo – 7
Played some useful combination balls with Moses and Iwobi, but found opportunities at a premium. Saw two shots saved, including an overhead spectacular effort and another blocked.

Tyronne Ebuehi – 7
Like the last game, brought some attacking effervescence down the right channel.

Elderson Echiejile – 5
Barely got a touch in the 20 minutes he was on. Got played a hospital pass but recovered to snuff out the danger.

Simy Nwankwo – 6
On for Ighalo, had two good looks on goal but went quiet thereafter. Still one to look out for.

Ahmed Musa – 5
Struggling to remember if he had a touch. Did he?
Kelechi Iheanacho – 6
Made some great runs when he came on, but didn’t really threaten much.