Is Etebo set for key role at the World Cup? 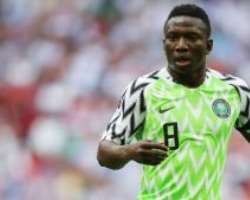 Oghenekaro Etebo’s impressive shift for Nigeria against England at Wembley on Saturday couldn’t have come at a better time,  as concerns about the Super Eagles’ midfield begin to grown .

The 22-year-old was introduced to stabilise a non-existent midfield at the pause in the 2-1 defeat following a disappointing first-half showing from the West Africans.

Where the experienced duo of Onazi and Joel Obi struggled during a shambolic first-half showing, Etebo’s energy and mobility helped calm things down when introduced at the restart, taking the steam out of the Three Lions’ build-up.

The 12-cap international effortlessly measured up to the flow of the game, recording 409 touches, in comparison to Onazi and Obi’s 361 and 386 touches respectively.

His strong showing allowed the more offensive John Obi Mikel and Alex Iwobi to express themselves.

Since his January loan switch from Portuguese side Feirense to a more competitive La Liga, Etebo has quietly caught the eye with his improved showings where his explosiveness and physicality have caught the eye.

After Nigeria’s poor first-half showing, Etebo’s excellent performance after the break suggested that a solution may not be so hard to find.

His battling qualities and his all-round game in possession injected Nigeria with impetus, drive and the composure that had been lacking before the break.

He could be an excellent complement for Mikel and Wilfred Ndidi, once he returns completely from his hamstring injury.

Certainly, he appears better equipped for a box-to-box role in midfield than any of his immediate rivals for the role.

While Onazi has often excelled when charged with hassling opponents and closing spaces in midfield, his mobility, vision, and distribution often lets him down.

He was culpable for England’s second goal on Saturday, losing the ball in the build-up, and may struggle to hold his own against Croatia’s mobile and technically proficient midfielders.

Obi has failed to stamp his claim for a starting shirt with unconvincing showings in four successive friendly starts, and while he’s a versatile option from the bench, he’s arguably not as strong in possession as Etebo anymore.

Certainly, last season, the Torino man enjoyed a pass-success rate of 81.7 percent in the Italian top flight, compared to 85.4 percent for Etebo.

John Ogu might perhaps provide the stiffest challenge for Etebo.

However, despite being a goal threat from distance, his lack of pace could count against him, particularly if paired with the sluggish Mikel.

Etebo is far from the finished product, but his intelligent use of the ball, and the energetic drive he offers through the middle could be key assets in Russia.

With Ndidi established as the Super Eagles’ destroyer, Mikel carving out defences at will with his well weighted passes, Etebo’s boundless energy and desire could be the missing element in the midfield and a solution to the deficiencies demonstrated during the first 45 minutes against England.