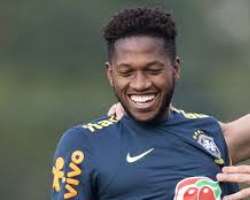 We could be watching a new-look Manchester United midfield next season, according to the  Mirror , which says Jose Mourinho “wants to make Paris Saint-Germain’s  Marco Verratti  his marquee summer signing.”

Mourinho has identified Italy international Verratti as his “top target,” but United might have to pay around £100 million to persuade the French champions to sell.

Verratti could be playing alongside Shakhtar Donetsk’s Brazil international  Fred , for whom a deal might be done in the coming days. Brazil manager Tite said he understood the interest in the 25-year-old after his team’s 2-0 friendly win against Croatia on Sunday and urged the player and club to  get things wrapped up quickly . “If I was a manager I’d ask to sign him as well,” he said.

West Ham “are said to value their player of the season, who has four years left on his contract, at £50m.”