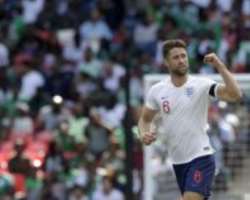 England relied on goals from Gary Cahill and Harry Kane before slackening in the second half to beat Nigeria 2-1 in a World Cup warmup match on Saturday.

On his first England appearance since October, Cahill headed in the opener in the seventh minute from Kieran Trippier’s corner in front of 70,000 fans at Wembley Stadium.

Raheem Sterling set up Kane to double England’s lead in the 39th before Alex Iwobi reduced the deficit in the opening two minutes of the second half.

After a week in the headlines over a gun tattoo and returning late for England duty, Sterling courted more controversy when he was booked for simulation for hitting the ground all too easily as goalkeeper Francis Uzoho came off his line to claim the ball.

“I had a decision to make whether to play him after turning up late,” England coach Gareth Southgate said. “But, actually, that wasn’t a decision after he started to come under fire from every other direction.

“It wasn’t about getting a response. The most important thing I do in the next six weeks is protect the players. They respect each other and understand how important it is they support and protect each other.”

Sterling hopes to block out the criticism.
“People will see stuff in the wrong way,” he told broadcaster ITV. “If I got left out I wouldn’t have had any complaints because I had to meet up at 11 o’clock, flight got delayed and I was a bit late in the morning so I completely understand where he’s (the manager) coming from.”

England has another friendly against Costa Rica in Leeds on Thursday before Southgate’s side opens its campaign in Russia against Tunisia on June 18.

Nigeria, which was held by Congo on Monday, plays the Czech Republic on Wednesday before facing Croatia in its World Cup opener on June 16.