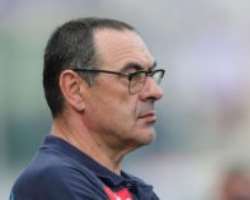 The weekend has come and gone. Monday has passed as well. And yet, technically speaking, it's still Antonio Conte rather than Maurizio Sarri who is the Chelsea head coach.

According to multiple reports over the weekend,  including the initial breaking news from Alfredo Pedullà on Friday night  after the second day of negotiations, Chelsea have reached a “general agreement” with Sarri on a two-year, €6-6.5m per year contract. Since Sarri himself was not present at those negotiations, he was expected sign off on the agreement once his representatives had officially delivered it to him.

Considering that Chelsea then submitted a bid for the head coach to Napoli over the weekend, we can perhaps presume that Sarri had agreed. But  Chelsea's €4m offer was rebuffed  on Sunday by the man holding all the aces, Napoli owner Aurelio de Laurentiis, and thus we remain at an impasse.

Meanwhile, there is still the issue Chelsea needing to find a graceful end to Conte's tenure at Stamford Bridge, which Pedullà reported yesterday is another major hurdle standing in the way of resolving this standoff. Some reports have claimed this part alone could cost Chelsea as much as €20m, or twice as much as Conte's £9m severance pay.

Sarri's buyout clause expires on Thursday. If Chelsea can't come to an agreement on either front before then, we could be entering uncharted territory and truly a game of who will blink first. It's a scene would not look out of place in a Sergio Leone spaghetti western, a genre certainly not unfamiliar to the De Laurentiis movie empire, be that Aurelio himself or his uncle,  the legendary Dino De Laurentiis .

Movie references aside, the situation is starting to be increasingly frustrating with each and every passing day, especially in a shortened pre-season and summer transfer window for English clubs. Liverpool are already working hard to reinforce and surely the rest of the top six will not be far behind. Chelsea need to find a swift resolution, one way or another.