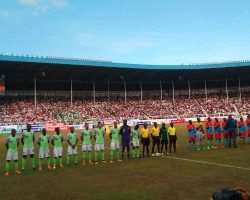 The Super Eagles were held to a 1-1 draw by Democratic Republic of Congo in a friendly game on the patchy pitch of the Adokiye Amiesiemaka Stadium on Monday.

William Troost-Ekong gave Nigeria a first half lead but Ngulubi equalised for DR Congo from the penalty spot in the second half.

It was a send-off game for the Super Eagles who will jet out to London on Tuesday for their friendly game against England in Wembley Stadium on Saturday.

The game saw the duo of Crotone striker Simeon Nwankwo and Kano Pillars and Nigeria Professional Football League (NPFL) top scorer Junior Lokosa make their debut for the Super Eagles and gave a good account of themselves.

The impressive Nwankwo put himself about and should have opened his goals account for the Super Eagles after good footwork inside the box on four minutes but saw his left-foot shot hit the bar with Kelechi Iheanacho's follow-up blocked.

Congo almost took the lead on eight minutes after William Troost-Ekong failed to clear a dangerous cross but his blushes were saved with a good save by Francis Uzoho whose outstretched left leg stopped England-based Benik Afobe's strike.

The Super Eagles broke the deadlock on 15 minutes through Troost-Ekong who slotted into the net after Iheanacho toe poked the ball away form Congolese keeper Mossi Ngawi Anthony from a clever free-kick from Ogenyi Onazi.

Nigeria went close on 33 minutes after the Congolese failed to clear their lines but Iheanacho's shot was blocked away to safety.

Iheanacho went close again on 35 minutes after he was played through on goal by Onazi only to hit a tame shot which the Congolese keeper dealt with.

With five minutes left in the first half, Bournemouth star Afobe had a chance to pull Congo level after turning inside the box only to hit his left strike just wide off target.

Before the start of the second half, the Super Eagles made two changes with Alex Iwobi replacing Iheanacho, Ola Aina went in for Elderson Echiejile and Joel Obi was substituted for Mikel Obi.

In the 57th minute, Nwankwo had a chance to double the Eagles' lead from a long throw from Aina but the Congolese keeper got down well to palm his header away before Lokosa was denied by a recovering defender.

Congo won a free-kick in a decent position on 61 minutes but Uzoho calmly plucked the ball in the air.

Oghenekaro Etebo had a chance to make it 2-0 on 68 minutes after a poor clearance from the Congo keeper but his long range effort went just wide.

Congo were back on level terms on 78 minutes through Ngulubi who converted a penalty after Aina fouled a Congo player.

Nwankwo was unlucky not to score from a pass from Ahmed Musa late in the game no thanks to a Congo defender with a good clearance.