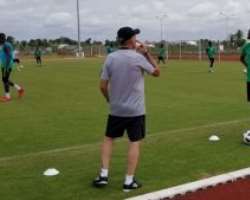 Not many who came to watch the Super Eagles’ first full pre-World Cup camp training session at the practice pitch of the Goodwill Akpabio Stadium, could have told Simy Nwankwo from Adam before the session started.

This includes the assembled posse of journalists who had defied the burning topical sun to turn up to observe.

By the end of the session, however, everyone present knew who the Crotone forward was, and this wasn’t just because of his towering beanpole frame.

All it took was one moment of goalscoring magic, but there were many others before and after.

After an hour of exercises, limbering up and ball work, Gernot Rohr broke his team into two sides to play against each other.

Simy led one line, and it was not too long before he left everyone open-mouthed with his skill.

First he beat the offside trap, admittedly a marginal call, but then out-sprinted his marker with long, rangy steps before moving one on one with goalkeeper Francis Uzoho.

Without breaking stride, he dropped a shoulder, watched Uzoho take the bait and sprawl helplessly on the turf, before chipping a majestic ball over the young goalkeeper.

First, a collective gasp, then applause went around the watchers on the sidelines. One security detail nearly dropped his rifle.

It was a moment of genius, and the kind of goal that can seal a World Cup berth for an outsider.

This isn’t to say that Simy has already secured his spot in Russia, but goals like that, and the consistently high overall technical ability he showed on Thursday, could well lead to a surprise selection.

“I am just here to be part of the family,” he told KweséESPN afterwards. “It’s not about what I can add to the team.

“It’s about becoming part of a big family that has been doing great things and adapting to the system. Inside the team there are a lot of quality players that have been doing well, so it’s just about becoming one of them.”

If he keeps up this level of performance, Simy should slide seamlessly into the Super Eagles side.

Ndidi trains alone
Wilfred Ndidi showed no signs of the injury which had kept him out of Leicester City’s final Premier League games as he walked on to the pitch with the rest of the squad.

However, it was soon obvious that he’s still not at hundred percent.

The midfielder trained alone with the physiotherapists on the sidelines as the rest of the squad sweated it out on the pitch.

Officials told KweséESPN that he is not far from a return to the pitch.

Eagles begin using FieldWiz GPS trackers
At the beginning of the session, the coaches lined up strange-looking half vests for the players to wear under their shirts.

It turned out the mystery vests, which Odion Ighalo jokingly referred to as his “bra”, were FieldWiz GPS trackers, which measure distance covered, speed, acceleration and sprints.

A team official told KweséESPN that Nigeria are the first of the African countries to deploy the monitoring technology.

CAF are scheduled to send the equipment to all five of its continental representatives for use during the World Cup.

Mikel and Ogu arrived later on Thursday afternoon but team officials told reporters Victor Moses would only join the squad in London.

It appears the Chelsea star has been given a few extra days off after his FA Cup exertions with the Stamford Bridge club.