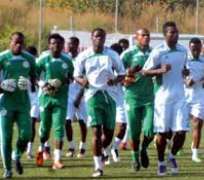 A total of 26 players were at the Le Meridian hotel in Uyo, the base of the Super Eagles as camp opened ahead of the 2018 FIFA World Cup in Russia.

Super Eagles boss Gernot Rohr called-up 30 players in his provisional list ahead of the 2018 World Cup and 26 of those are already in camp.

Ahmed Musa and Shehu Abdullahi joined in late on Wednesday. How players spent Wednesday in camp

The players available had breakfast around 8 am on Wednesday before a team meeting immediately after.

They headed to the Godswill Akpabio International Stadium where they had an open-door training session.

Leicester City midfielder Ndidi trained alone, away from the group as he recovers from the hamstring injury he suffered in the Foxes’ 5-0 loss away at Crystal Palace on Saturday, April 28.

Super Eagles boss Rohr is confident that the midfielder will be fit for the World Cup.

After the training, the players headed back to the hotel for lunch and to rest before an evening session in the indoor gym of the hotel.

They also took part in a light volley ball training at the hotel.

The Super Eagles will take on DR Congo in a friendly game on Monday. (pulse)