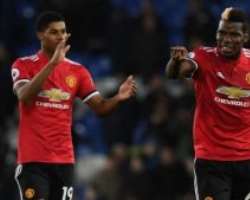 France international Pogba has been routinely criticised for his performances this season after scoring six goals and providing 10 assists in 25 league appearances for second-placed Manchester United.

Media reports have linked the 25-year-old with a big-money move to France's Paris St. Germain (PSG), among other top European outfits, in the close season transfer window.

“I think he's going to be here next season,” Mourinho told reporters.

“So, in this moment, for me, he's staying.”
England international Rashford has been used on the left wing for a majority of the campaign and has scored six goals in 33 league appearances for Manchester United.

But media reports have linked the 20-year-old with a loan move next season to gain experience.

“No,” Mourinho said when asked about a potential loan for Rashford. “What does he need to do to impress me? He impresses me.

Rashford has played the most games for Manchester United under Mourinho, featuring in 102 of the club's 117 competitive matches since the Portuguese boss took charge in 2016.

Manchester United will be aiming to seal a second-place finish when they travel to West Ham United later on Thursday and end their league campaign at home to Watford on Sunday.

Mourinho will guide Manchester United against his former club Chelsea in the English FA Cup final on May 19.(Reuters/NAN)