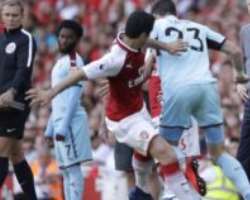 A resurgent Chelsea sealed a fifth successive victory when Olivier Giroud headed in the only goal against Liverpool, which has only one win in five league games.

It’s an impressive turnaround for Chelsea, which has cut the gap to fourth-place Tottenham from 10 to two points in a month.

The 1-0 win over Liverpool sent Chelsea within three points of Juergen Klopp’s side, which has neglected its domestic responsibilities while qualifying for a first Champions League final in 11 years.

“One month ago it was impossible to imagine to arrive at the end and fight for a place in the Champions League,” Chelsea manager Antonio Conte said. “Now there is the hope because we are getting three points every game (five in a row) and our opponents are dropping points.

“Our future is not in our hands but we have to try to get three points to put the pressure on the team who stay ahead of us.”

While both Chelsea and Tottenham have two games remaining, Liverpool only has one game left and could be relying on its superior goal difference to secure a place in the Champions League — unless Liverpool beats Real Madrid in the May 26 European final.

Whoever finishes fifth will have to settle for a spot in the Europa League alongside Arsenal and Burnley, who met on Sunday in Arsene Wenger’s final home match in charge of the London club. It was a fitting send-off from the Emirates Stadium for Wenger, with Arsenal demolishing Burnley 5-0.

Wenger is leaving Arsenal after 22 years, having failed to win the Premier League since 2004.

Man City, which sealed the title three weeks ago, received the trophy for the third time in six years on Sunday but couldn’t produce a performance befitting title celebrations after being held 0-0 by Huddersfield.

The games on Sunday took place against the backdrop of an outpouring of concern for the health of former Manchester United manager Alex Ferguson, who had emergency surgery on Saturday for a brain hemorrhage.

“Football aside, get well Fergie,” read a banner being held by Man City fans.

WENGER FAREWELL
Just a week after Wenger received a commemorative plaque on the Old Trafford pitch from Ferguson, the Arsenal manager started his farewell address to Arsenal fans by urging his former managerial adversary to “get well very quickly.”

Arsenal signed off the Wenger era at the Emirates Stadium in the style which has been absent so often — particularly this season. Pierre-Emerick Aubameyang scored twice against Burnley, with Alexandre Lacazette, Sead Kolasinac and Alex Iwobi also netting in a game that produced chants of “There’s only one Arsene Wenger” from both sets of fans.

Wenger then got to lift a Premier League trophy for one final time: a miniature gold version that celebrates the unbeaten Invincibles season 14 years ago.

Arsenal is yet to name who will replace Wenger in its first managerial hiring since 1996.

“I would like to thank everyone at the club, who makes it so special,” Wenger said in an address to fans. “Really push to support these players, the staff who remains. For me this group of players has a special quality, not only on the pitch but off the pitch, follow this team and support them next season because they deserve it.

“I’d like to finish with one simple word: I will miss you. I hope to see you soon, well done, goodbye.”

GUARDIOLA CELEBRATES
There are still two games left in Man City’s league season, so Pep Guardiola’s team still has something to play for — breaking the record for most points, wins and goals in a single Premier League campaign.

After the stupor of the draw against Huddersfield, the Etihad Stadium was enlivened by City fans invading the pitch at the final whistle before the trophy presentation. Blue-and-white tickertape flew up and fireworks exploded as Guardiola got his hands on a league trophy in a third country after successes at Barcelona and Bayern Munich.

Guardiola was then thrown in the air by his squad. Some of the backroom stuff swigged on huge bottles of champagne. City’s fans, who earlier defied orders to not invade the pitch after fulltime, chanted song after song about their favorite players.

“England is a special place and is so tough. Today we saw it,” Guardiola said. “You never know if you are going to win, but I had no doubt what I had to do. To make back-to-back titles in this league will be tough, but we accept the challenge.”