Arsene Wenger, Arsenal bid each other adieu on emotional day at Emirates 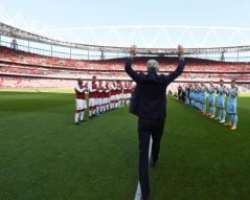 And finally, it was time for nothing but love and appreciation.

Wenger received two separate guards of honor, one before the match against Burnley, one afterward. And following a stylish, resounding 5-0 victory, he spoke to the 60,000 men, women and children who had come to send him off into the sunset.

“Above all, I am like you. I'm an Arsenal fan” Wenger said into an intermittently malfunctioning microphone. “This is more than just watching football. It's a way of life. It is caring about the beautiful game, about the values that we cherish.”

The full speech is above.
Wenger was also gifted the golden that had been presented to the club after its unbeaten season in 2003-04. It is a special, golden, miniature replica of the Premier League trophy to commemorate the “Invincibles.” And now it is Wenger's to keep.Wenger's farewell tour, before Sunday,  had been underwhelming . There had been empty seats. There had been a  classic collapse . There had been  dull soccer . There had been  one last European failure . And there had been lingering frustration that tainted the extended sendoff.

But from the moment Wenger stepped off the Arsenal team bus to applause from fans, Sunday was special. “Merci Arsene” was plastered all around the Emirates, including on the facing above the box office along with a list of Wenger's trophies. Club staff wore shirts with “Arsene” and the number 22 on the back. Commemorative flags and scarves were on sale outside the ground.

The pregame tributes culminated with a guard of honor five minutes before kickoff. Players from both teams and referees greeted Wenger as he walked out onto the field. The Emirates stood as one as Wenger waved to the fans who had come to bid him adieu.

Those fans then saluted him throughout the match. There wasn't a single empty seat in the house. “There's only one Arsene Wenger,” they sung.

Before the match, they had lined up outside the Emirates' “Armory” to sign a commemorative book and write messages to Wenger. Messages from players were also embl

azoned on customized jerseys nearby in the club store.

Players and fans alike also wore shorts with “Merci Arsene” across the front.

“I expect today will be dominated by sadness,” Wenger said in his matchday program notes. “It's the end of a long story for me at Arsenal. But I will also feel grateful for having led this club – that I cherish so much – for such a long time.”

And he was right. It was a day of sadness. But it was also a day of gratitude, a day to celebrate all that he had accomplished over 22 years.

Arsenal scored twice in the first half as that celebration rippled around the stadium. It scored three more after halftime.

Then emotions became overwhelming. Massive banners were raised with Wenger's picture on them. After Arsenal had also honored club captains Alex Scott and Per Mertesacker, and longtime kit man Vic Akers, club legends Pat Rice and Bob Wilson addressed the Emirates and spoke about Wenger.

The Frenchman then strode out onto the field for one last prolonged standing ovation. He waved to fans.

He then spoke to them. As expected, he seemed slightly uncomfortable with all the glitz and glamor of the occasion. But his speech was great. He began by  wishing Sir Alex Ferguson well . He ended in classic Arsene fashion.

“I will miss you,” he told the crowd. “Thank you all for being such an important part of my life. And I hope to see you soon. Well done. Bye bye.”