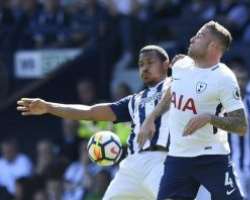 The Baggies needed to beat fourth-place Spurs to stand any chance of staying up and left it late when Livermore turned the ball past Hugo Lloris.

Stoke’s 2-1 defeat to Crystal Palace kept West Brom’s hopes of survival alive with the Potters becoming the first team relegated from the top flight this season.

And West Brom, which has spent nine of the last 10 seasons in the Premier League, could still achieve an improbable survival after its late show.

But it will still be relegated if Southampton beats Everton in the evening kick off.

Defeat also meant Tottenham is yet to confirm its top four spot and Chelsea could close the gap to two points with two games left if it beats Liverpool on Sunday.

West Brom has dropped 26 points from winning positions this season – the most in the league – but there were few hints they would take the lead at The Hawthorns.

Ahmed Hegazi planted a header wide just before the break as the Baggies wasted their only opportunity of the first half.

Spurs carried the greater threat and Ben Foster needed to be alert when Erik Lamela threatened before he palmed away Christian Eriksen’s free kick after 62 minutes.

West Brom was running out of time but Harry Kane almost scored a spectacular own-goal when Lloris turned his sliced clearance over with 17 minutes left.

But the hosts kept pressing and grabbed the winner in stoppage time when Danny Rose and Livermore went for the ball during a goalmouth scramble and Livermore poked it in to spark wild celebrations.