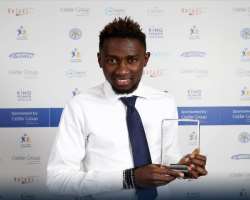 Ndidi picked the award at the Club's annual Awards Ceremony on Tuesday night.

The former Genk midfielder beat the likes of Demarai Gray and Ben Chilwell to the award.

Ndidi joined the Foxes January 2017, he has been churning out impressive performances since making his debut.

Ndidi was also nominated for the club's player of the year award which was won by Harry Maguire.

Ndidi has made 33 appearances for Leicester City in the EPL this season, he has won three man of the match awards and he has three assists.