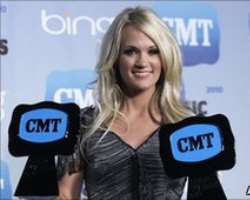 Carrie Underwood was the only artist to win two awards

The awards, which took place in the Bridgestone Arena in Nashville, were voted for by fans.

Collaborative video
Collecting one of her awards, Underwood addressed her “awesome fans”.

She said: “They were there before I had anything, an album, a record deal, a tour or anything like that. They built me from the ground up.”

John Mayer and Keither Urban performed together
Urban, who was accompanied to the ceremony by his wife Nicole Kidman, took to the stage to perform Hit The Ground Runnin' with John Mayer.

Meanwhile, Lady Antebellum's Need You Now was named group video of the year, and duo video of the year went to Brooks and Dunn for Indian Summer, just two months before they perform together for the last time on their Last Roundup tour.

“We were not expecting this,” Brooks said. “So much that Mr Dunn has gone to the restroom – in Santa Fe, New Mexico.

“I told you you should be here. I am not bringing this to you. You're going to have to come and get it. This is the kind of thing that will make them think we're going to break up the duo,” he joked.