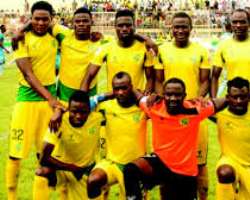 NPFL Champions, Plateau United lost 4-0 to USM Alger of Algeria in the second leg of their play-off round fixture to miss out on a place in the group stage of the 2018 Confederations Cup.

The first leg ended 2-1 in favour of the NPFL Champions, but they couldn't finish the job in Algeria as they succumbed to a 4-0 bashing to exit the competition.

Kaddour Beldjlali opened the scoring for USM Alger in 29th minutes with a glancing header before Oussama Darlafu scored with another header four minutes after the break.

Oussama Darlafu and Mohktar put the icing on the cake to put the tie beyond the reach of Plateau United.

Meanwhile, MFM will slug it out with Djoliba of Mali for a place in the group stage of the CAF Confederations Cup.

The Olukoya Boys lost the first leg at the Agege Township Stadium 1-0, they will be hoping for a miracle in Mali to scale through.

Akwa United will have to overcome a 2-0 deficit when they take on Al- Hilal of Sudan at the Godswill Akpabio Stadium today.

The Promise keepers lost the first leg 2-0 but they will be hoping to keep their promise by qualifying for the group stage.

Enyimba will welcome Bidvest Wits of South Africa at home in the second leg of the CAF Confederations cup Play-off, the first leg ended 1-1 in South Africa.

The People's Elephant will hope to outwit the South Africans to book a place in the group stage of the competition.