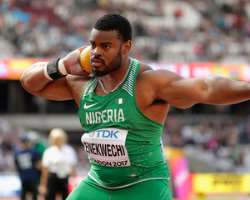 Chukwuebuka Enekweli has won Silver Medal for Nigeria in the shot put event at the ongoing Commonwealth Games in Gold Coast, Australia.

Enekweli set a new personal best record when he threw a distance of 21.14m to finish second in the event.

Thomas Walsh of New Zealand won gold in the event after throwing a distance of 21.41m while Tim Nedow from Canada finished third with a distance of 20.19.

Another Nigerian Efe Kalu finished 12th in the finals with a throw of 17.86m.

Meanwhile, The Nigerian Table Tennis team won the silver medal after losing 3-0 to India in the Finals.

The Contingent led by Segun Toriola had earlier defeated the English Table Tennis team in the semi-finals in the early hours of Monday.

Another Nigerian Seye Ogunlewe finished fourth in the men's 100m final of the 2018 Commonwealth games in Australia.