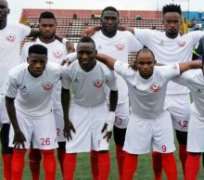 The victory was a huge birthday present to the team's General Manager, Davison Owumi, who turns 58 today.

Ajani Ibrahim brace in 23rd and 43rd minute, and Bright Silas 85th minute goal ensured the flying antelopes put smiles on the faces of the General Manager and supporters.

Speaking after the match, Rangers coach Ogunbote said that he was happy with the three points, saying it would add value to their standing in the league.

“The players did well because they applied what we taught them in training; five goals in two matches is a good sign that the players are getting there.

“Each game comes with its tactics and plan and it worked out for us today and we are going to keep doing our best to ensure we always get it right all the time,'' he said.

Yobe Stars Technical Adviser, Baba Ganaru said that the game lived up to its billing.

“We learn new lessons in football and learning is till death so we accept defeat and we are going home to prepare for our next match.

“The players did well but we lost to some tactical reasons and maybe the long distance we applied affected us as well.

“I do not like to speak on officiating but the second goal is offside but so be it, because that is part of the game,'' he said.

The visiting team goalkeeper, Itodo Akor who was former Rangers goalkeeper said that he was disappointed for losing the match.

“I always like to be on the winning side be it against Rangers or another club, so in this case losing to my former club is not the bone of contention, we planned at worst to get a draw because our first target is to shock the flying antelopes before their fans,'' Akor said.

The News Agency of Nigeria (NAN) reports that Akor left Rangers last year after serving them for years and was part of the club winning team in the 2015/2016 season.

NAN also reports that Akor was second goalkeepers to Nana Bonsu who manned the post for the home team. (NAN)