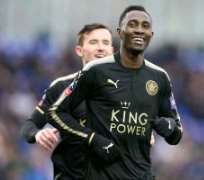 Arsenal have joined the likes of Liverpool and Manchester United in the race to sign Super Eagles and Leicester City midfielder Wilfred Ndidi.

According to Daily Mail, a source close to Ndidi revealed this to English newspaper The Sun.

Ndidi, 21, has been impressive since joining Leicester in a £15million deal from Belgian side Genk in January 2017.

He has featured 36 times for Leicester this season in all competitions including Saturday's 2-0 win at Brighton – a game in which he was sent off, the second time this season.

“There has been so much interest in him. He is going to be a top player and Arsenal have been in contact,” the source told The Sun.

“They want to sign him this summer.
“Arsene Wenger is a manager he admires a lot and his friend Alex Iwobi has told him lots of great things about the club.

“But there is no shortage of offers. Liverpool have shown strong interest and [Manchester] United.”

Ndidi was in action for the Super Eagles in their two friendlies against Poland and Serbia.