Why Chelsea won't lose money on their Morata gamble: Morientes 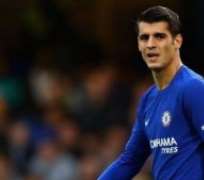 He may have broken his Chelsea scoring duck against Leicester, but Álvaro Morata will know that plenty of work remains to be done if he is to salvage his World Cup dream.

The forward has been a regular for his country over the last couple of years, yet as Spain prepared for prestige friendlies against Germany and Argentina, Morata was watching from afar, coach Julen Lopetegui having taken a dim view of his recent form.

His omission from the squad was the culmination of a frustrating few months at club level: Morata had gone 13 games without finding the net before Sunday, and was left out of the starting XI in both legs of the Champions League tie against Barcelona.

There have been mitigating circumstances – a niggling back problem and Antonio Conte's experiments with Eden Hazard up front – but there is a palpable sense of disappointment about how his campaign is panning out, especially after such a promising start to life at Stamford Bridge.

The great irony is that Diego Costa, the man Morata was signed to replace, has been drafted back in by Lopetegui after his mini-sabbatical, and the juxtaposition between the two players does Morata no favours; the younger man simply cannot match the snarl and street wisdom of Costa, as Premier League centre-backs have been delighted to discover.

Yet all is not lost for Morata. Lopetegui clearly believes he can rediscover his mojo – “he has a good chance of going to the World Cup and he knows it,” he said – and one former Roja No.9 has backed the 25-year-old to come good at Chelsea in the months ahead.

Fernando Morientes knows how difficult it can be for a Spanish striker to adapt to life in the Premier League, having endured an up-and-down spell at Liverpool under Rafa Benítez, and told Yahoo Sport that Morata has everything it takes to be a success on these shores – provided he is given time by the Blues.

Fernando Morientes found it tough to adapt to the Premier League

“When you move to England, everything changes: the football, the culture,” said Morientes, speaking on the UEFA Champions League Trophy Tour presented by Heineken®. “I think everyone who makes that move needs a period of adaptation. Spanish players need that, [but] he's a player who can make the fans very happy.

“He has already scored some important goals. Now he's searching for his form after coming back from injury. He has arrived at a very big club and the important thing is that the coach believes in you. I think Álvaro has that: Conte managed him at Juventus and believes in his work.”

Morata may not have the raw, concussive power of Costa, but Morientes nonetheless sees him as a throwback figure – an emissary from the lost world of target men, who occupy centre-halves and create space for team-mates. It is, perhaps, a slightly generous reading – Morata is not a natural hold-up man in the manner of, say, new team-mate Olivier Giroud – but there are clear physical resources that can be honed further in the years ahead.

“I think that that type of striker is disappearing nowadays,” Morientes continued. “Today, more teams are looking for small, technical forwards, who won't impose themselves in the air, but Álvaro Morata has everything.

“He's quick, he's strong. He's good with his head. He likes being in the area. For a team that normally plays attacking football and creates lots of chances, having a player like him, who attracts the attention of so many defenders, is absolutely brilliant. I think that Chelsea have taken a very good bet on Álvaro and I hope it works out.”

Morata himself will be hoping so too. He will also be aware that, with the World Cup fast approaching, time is of the essence